Our stop start didn't work all the time, new battery fitted under warranty, no probs since.
Top

The dealership were dismissive of the problem when I spoke to them about it. They said the most common problem is it ceasing to work at all, rather than the problem being intermittent. I've ended up changing my driving style to allow the engine to kick in fully after the system has stopped the engine. Whereas with every other car I've had I just had to put it in gear and pull away, I now give it a couple of extra seconds before letting the clutch up. That has pretty much solved it for me, and I've only had it stall once in the past several months. I still think it's a rubbish system though.
Top

TBH, I dont understand why people are getting so het up about it?
In reality, it saves very little fuel, especialy when the stop is less than 15-20 seconds. Chances are in most cases there is a the sensors thats preventing the stop/start kicking in. IE it may think the battery isnt fully charged, water temp to cold, or too hot, too much current draw for electricals.....

Yes, it could indicate an iffy battery, and it seems to be more of an issue with the 1.2DIG-T engine compared to the 1.6DIG-T... but I generaly turn mine off as the stop/start kicks in just as the light turns green again!
Top

It's not a case of getting het up about it as much as expecting the features on a brand new car to operate properly. When you get the sort of response I got from the dealership is it surprising people aren't impressed? If you bought a TV which only changed channels when it felt like it would be equally as relaxed about the problem?
Top

But maybe it is operating properly... As I say, the engine will only stop if all the parameters are in the right ranges (battery charge, electrical load, engine temp, how long ago the last stop/start was, if the car has moved, if the bonnet is up or down, if the driver has their seat belt on, if any of the doors are open, is the clutch being depressed (even ever so slightly) just to name a few….)

Using a TV as an example is wrong in this case. Of course you should expect a TV to change a channel each time you request it. However you should not expect your car to stop/start every single time you stop. By stop/starting at the wrong moment could result in engine damage, or premature ware of a component.
Top

You seem to be missing the point. The people in the service department at my local dealership were surprised that I had an intermittent problem with the Stop/Start system. Their comment was that the system usually just stops working at all. That was their statement. I would suggest that there is a fundamental problem with the system if staff at the dealership expect it to fail.
I accept that there are parameters within which it should operate, but there is very clearly something not right with the system.
Top

We received a copy of the diagnostics customer warranty report and i will go over what it highlighted and also post a picture of the report at the end.

Incident: A stop / start eml light on.
Fault: Concern of loss of power and mil light on - recovered in.
Cause: Confirm fault code P0304 - F8 recorded misfire carried out compression test finding cylinder 1 at 60 PSI, 2 at 75 PSI, 3 at 60 PSI and 4 at 105 PSI oil level only slightly low.
Rectification: Replacement engine required as per bulletin TB EM 15/05


Our car was recovered on January 15th 2018 and had a fully new engine replaced. It was road tested and apparently all was okay. So we took back our vehicle on Saturday 10th February 2018 and within 10 miles of driving it, we noticed that the cruise control was working, so we turned around and took the vehicle back.

It is now July 2nd 2018 and we still await return of our vehicle as there have been issues regarding sorting the cruise control. We have learnt that Nissan have replaced the ECU, alternator, wiring loom, and many more parts to try and sort this out. There have been software updates done on the vehicle as well as a technician from Sunderland coming all the way up to the north of Scotland to attempt a repair. Thats a total of 167 days and we have been told by someone called Nikki from Nissan UK that she has looked into our case and is happy with the way it has been dealt with. We were initially provided with a case manager called Amber Sweetman but she constantly lied to us and would not return emails in a timely fashion or if she did, would not answer any questions from the previous emails.

We asked Ms Sweetman for a copy of TB EM 15/05 but she refused to release it to us. So we did some investigation work and secured a copy through a third party garage and now we know why she refused to tell us much about it. The document itself was released on 18th December 2015 and updated on 19th February 2016.

The vehicle will actually be better than before because before when it was built, it was built with a manufacturing defect in it and now we know what that defect was, we've ironed it out and it now doesn't have that defect. So there's even less of a chance that it's going to be a problem for another customer in the future

Given we purchased the vehicle in March 2016 and coupled with the fact that the bulletin was released in December 2018 and Nissan have now admitted they knew about the manufacturing defect then we are asking Nissan to replace our vehicle with one that is fit for purpose as opposed to our old one which wasn't at time of sale.

And if that's not bad enough, Dickson's of Inverness have now told us that when they replace an engine, Nissan are supposed to take the old one back. If they don't take it back then Dicksons have to hold onto it for 3 months before they can dispose of it themselves. Presently they have 3 engines awaiting disposal and have disposed of 9 in the last 12 months. There is also currently another Nissan in waiting a new engine. Thats 13 engines in just over 12 months which i find absolutely unbelievable. 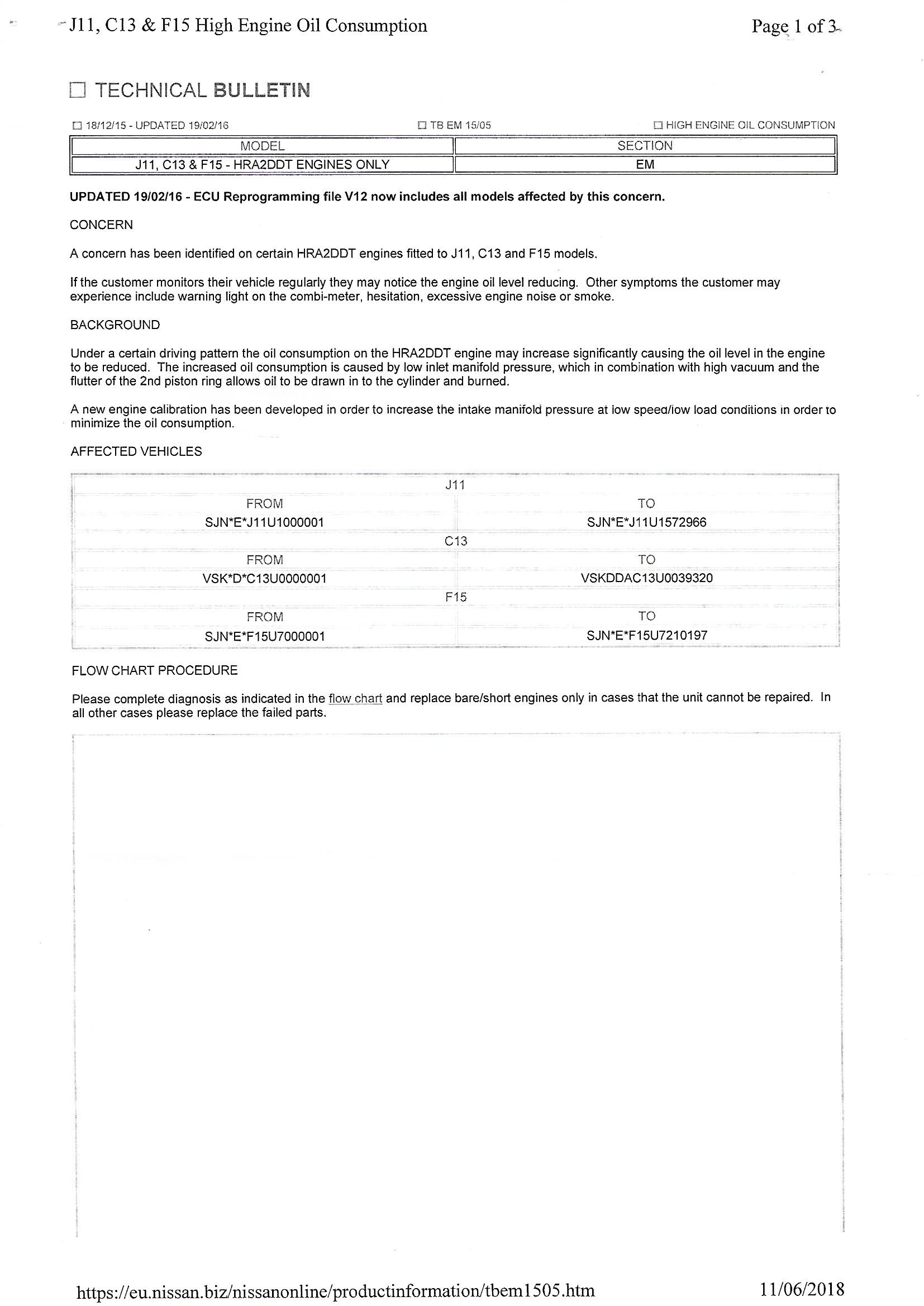 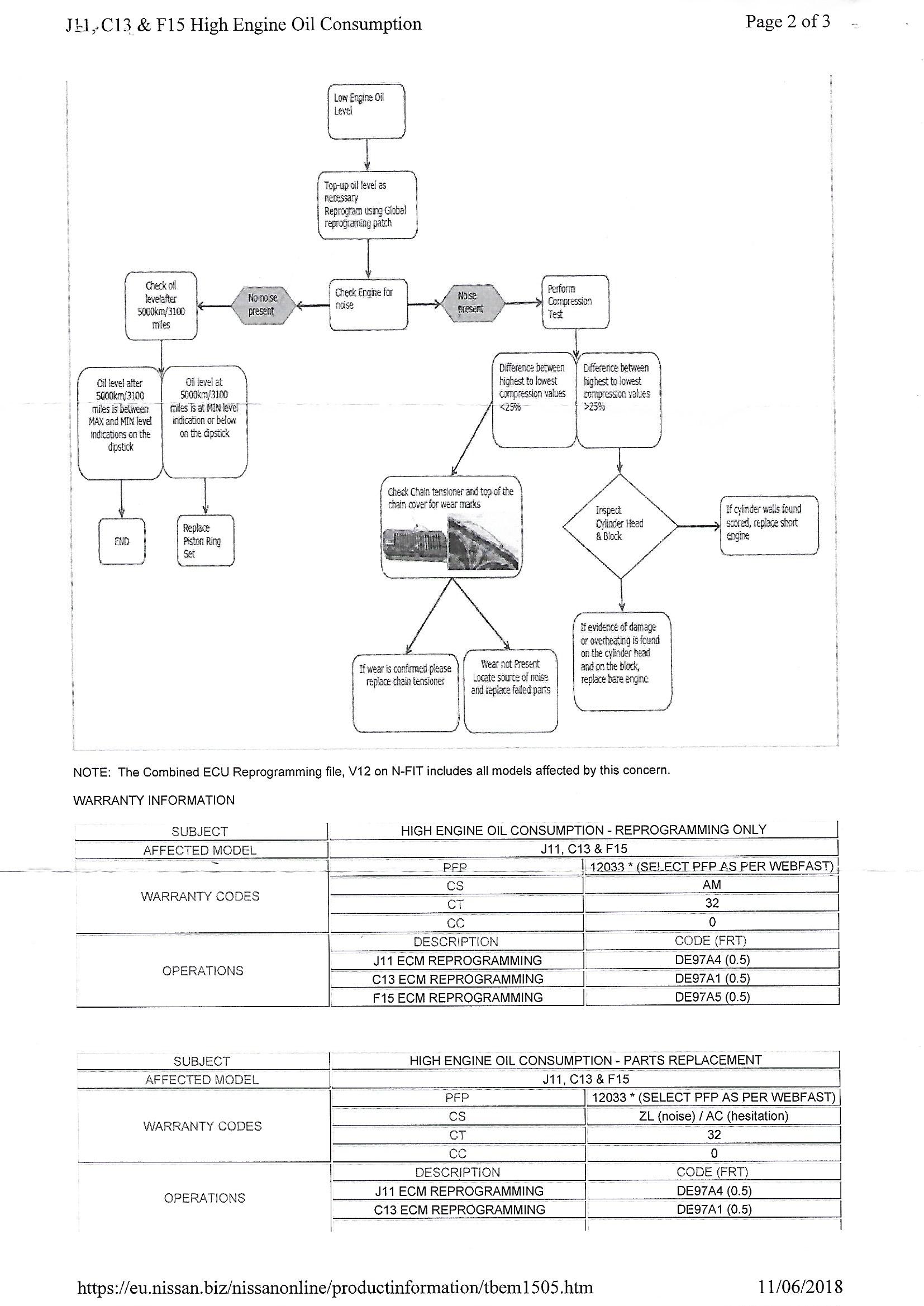 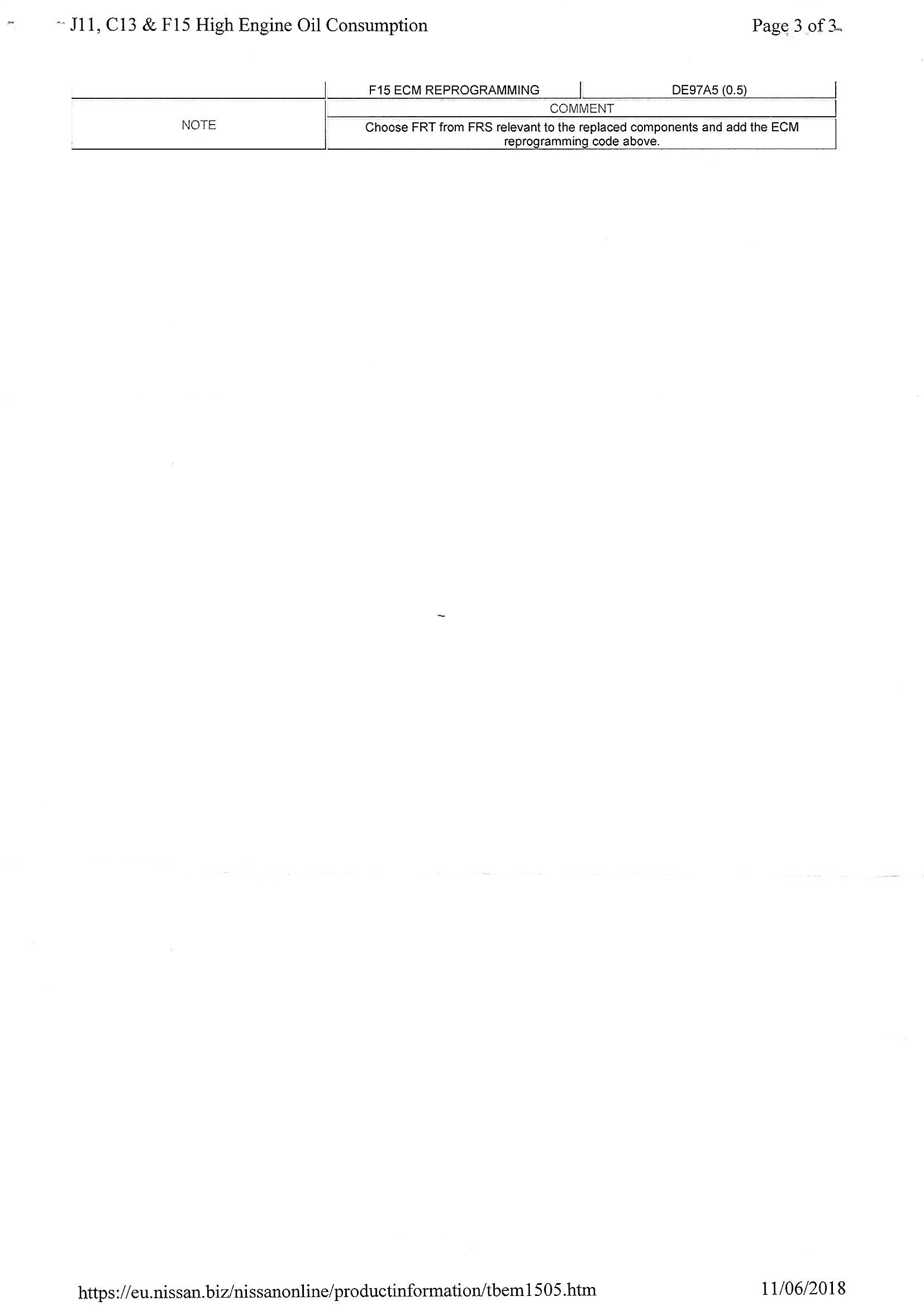 Hi all, first post but i'm about ready to torch my car in a layby somewhere...

Over the last month or so, i've been getting a very similar issue to those who have been posting in this thread. Having had a read through, i'm getting the impression that this could be something as simple as low brake fluid to something as serious as a replacement engine!

Similar to many here, i started getting the STOP/START system fault intermittently before that evolved into the STOP/START fault moving quickly onto the RADAR fault to now showing a "wee car skidding" warning light. If i stop the car and restart, all resets and seems fine... until it happens again, which could be the same day or a few days later.

I suppose i'm just looking for clarification as to what i need to do. I'll be checking brake fluid as soon as i get home tonight, but my concern is if its one of the more serious problems. I spoke to the Nissan garage where i bought it from and they want the £90 for the diagnostics test but, from what i read, this sounds like its more common than not, so why are they not more aware of this? Surely there can't be that many known issues that result in the series of warnings appearing in quick succession?

Any advice would be gratefull received. Oh, one daft question, my brother has one of theose plug-in diagnostic meters... would that work on my car? Just wondering if that would be more help in working out/confirming whats wrong.
Top

One of my work colleagues happened to have a bluetooth diagnostic thingy that can be used to read ECU codes via his phone. We connected it up and after doing some simple checks to ensure it was working, we tried to read any fault codes that were saved... nothing! We tried a few other things, again, to ensure the device was working (all appears to be ok) and again tried to check the codes... again nothing.

My colleague has used this device on a number of his cars and its worked a treat for him, so i have no concerns that its not working, but that would then suggest that no actual fault is being generated/logged in the ECU. If this was the case, what could possibly be causing the issue? Could it be something simple like a loose wire? Or would that still log something?

Apologies for what might seem like daft questions, but my knowledge and understanding is not much higher than entry level.
Top

Not daft questions but one's we probably can't help with directly. If the car is under warranty it needs to go back in to the dealership for investigation. There is no excuse for them trying to charge you to diagnose the fault if it is under warranty.
Top
Post Reply
108 posts

Copyright 2017. Not associated with Nissan.